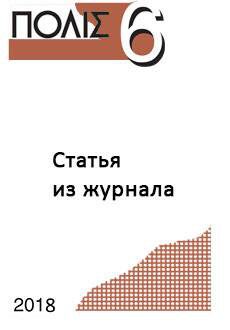 The article analyzes the concept of political lottery as a way of selecting candidates for power positions as well as a full-fledged political institution. The use of lotteries in this capacity has a long tradition, it can be traced back to the historical experience of ancient Greek policies, namely, Athens. Currently, there is a discussion about the scope of possible use of political lotteries due to deformation of feedback mechanisms between government institutions and society at large. Political lotteries have already been put into practice in a number of countries, including Ireland and Germany. In other states, there is a discussion of the appropriateness and specific forms of implementing the selection of “random” people in the decisionmaking bodies. The authors enumerate several approaches to the given phenomenon. The minimalists believe that the use of political lotteries and implementation of deliberate discussions between selected delegates can be useful only at the local level within narrow-issue framework. Inclusivists insist that political lotteries are applicable in different situations and the scope of their application should not be limited to the local level of decision-making. From this point of view, the randomly selected bodies can be included into the system of already existing political institutions. Finally, the maximalists believe that the selection method will create a new type of political regime that can ensure a more equitable representation of citizens’ interests. The article explores the main arguments and points of disagreement among representatives of the three approaches as well as existing projects for creating “lottery-based” political institutions. The authors analyze the main reasons for applying to the practice of political lotteries and, as a consequence, determine the main advantages of random selection for political positions. Among these advantages are the reduction of the corruption component in the selection process, a statistical representative sample as a result of the process and the decreasing importance of traditional social and political dividing lines. The authors come to the conclusion that political lotteries also have shortcomings such as the awkwardness of the functioning of the lottery-based bodies and the need to search for a new format of checks and balances.