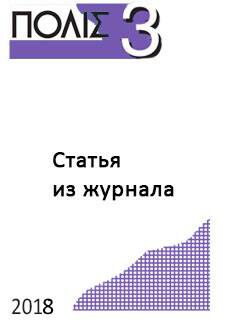 The article is devoted to the study of evolution of public perceptions of new Russia’s postSoviet borderzone through the analysis of their representation in Russian press. “Nezavisimaya Gazeta” was chosen as a focus newspaper. The study is based on a database of publications collected through screening of this edition in four periods: 1994–1995, 2000–2003, 2008–2012 and 2013–2014. The newspapers titled “Sovetskaya Rossiya”, “Zavtra” and “Novaya Gazeta” were used as the sources of additional information. It has been found that modernized East-West dilemma serves as a framework of these representations. Russia faces a fundamental choice between two vectors. The Western (European) vector means the rapprochement with the members of the EU and NATO, adoption of their values and development models. The Eastern (Eurasian) one implies total or partial reintegration of post-Soviet space and creation of new autonomous center of power within upcoming multi-polar world. Debate about the future of newly formed borders and the whole post-Soviet space, about building relations with former union republics on the one hand and the EU and NATO on the other, about aims and composition of regional integration projects etc. has invariably focused on the analysis of this dilemma. From the 1990th there were changes not only with the balance between two vectors within the media political discourse (non-contradicted in early 1990th they turned in the middle of 2010th into opposite sides of a dichotomy while the eastern vector appeared to be a dominant one) but also with their proper understanding. This article concerns with the Western part of two-faced discourse that reflects the transformation of collective West from focus of consolidation, source of economic and political modernization and a role model to key geopolitical rival which de facto plays a role of the Evil on the world political map.