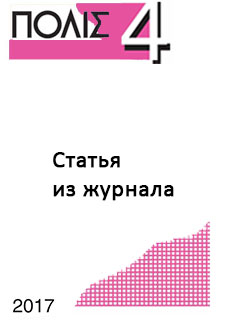 Tokarev A.A. Comparative Analysis of the Post-Communist Secessions: The Prognostic Attempt of Quantification of the Factors` Impact on Secession. – Polis. Political Studies. 2017. No 4. P. 106-117 (In Russ.) .

The USSR and Yugoslavia collapses gave rise to aspirations of some administrative units to get autonomy of the former mother-state countries, achieving the status of really sovereign states. In both cases, the majority of secessions had an external patron-state, military conflict with the mother-state, obvious problems with internal sovereignty. Secession fulfilled attempts of the public administration, linguistic, ethnic and cultural identification. They sought to preserve the status within the USSR and Yugoslavia, in contrast to the mother-states. All these factors are common to post-Communist secessions, but each of them has the individual country characteristics. DPR and LPR polities are aimed at secession from the unitary Ukraine. The author proposes to consider it in comparison with the secession in the federations. He believes the processes around 2014-2016 years of the Russian-Ukrainian relations are the deferred influence of the Soviet Union collapse. The purpose of research is the forecast of the success of Donbass secession by means of quantification the degree of the factors` influence. 8 post-Communist secessions are compared by 10 bases, which are factors of secessions processes. Each of the 10 factors was assigned a numerical value on a scale from -3 to +3, depending on the importance of its impact on the success of secession. As a result, all the values are summed, showing the probability of the secession success. The author concludes that while the reduction of the two factors importance (1) the patron-state influence on the DPR and LPR state-building, (2) the control under common border with it, they will be unsuccessful secessions. DNR and LNR projects are leaders of the secession failure (-11 points) – the worst probable result is -19 points. The policy of the mother-state is aimed at reintegration, primarily the territories, but not to their citizens. It will most likely lead to the exodus of large numbers of refugees from the region. This will be followed by many years of value conflict between the residents of Donbass and Ukraine and will be a constant danger factor for the Ukrainian stateness.

Be the first to review “Tokarev A.A. Comparative Analysis of the Post-Communist Secessions: The Prognostic Attempt of Quantification of the Factors` Impact on Secession. – Polis. Political Studies. 2017. No 4. P. 106-117 (In Russ.) .” Cancel reply