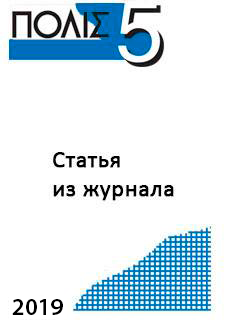 This article analyzes the results of the all-Russian sociological surveys that, in recent years, were realized by the Federal Center of Theoretical and Applied Sociology of the Russian Academy of Sciences. The main purpose of this article is to identify important shifts in the mood and expectations of Russians, from the point of view of the future of the state. The authors pay special attention to the reasons requests for changes have become actualized in the public consciousness, as well as its main components and its potential actors. According to the authors, the actualization of this request was the result of a sharp change in the vector of public priorities that represents a reaction a significant part of Russian society has to the authorities’ inability to ensure their obligations, under the so-called “paternalistic consensus”, which for many years remained the basis of the request for stability. It is shown that this request, firstly, is still of an intra-systemic nature and focuses the authority (more likely, through wishes rather than requirements) on the evolutionary change of society, not on the radical institutional transformation. Secondly, this request is very amorphous, both in its ideological content and in its social base, and focuses mainly on the today’s socio-economic realities. Thirdly and lastly, the youth is its main bearer and the most obvious beneficiary; however, sociological polls demonstrate that other social groups and strata are also interested in overcoming the existing status quo and in initiating constructive changes. The request is focused substantively on such basic ideas as a) the minimization of various social inequalities; b) social justice, c) democracy, d) the greatness of the state. At the same time, the majority of the citizens who took part in the sociological polls consider that Russia should base its state’s greatness and status as a key international player on its inclusion in the most economically developed and politically influential countries of the world, not on building up its military power. It talks about the public reevaluation of the state’s role and the dissolution of state values as a key tool for the realization of the common good. The vast majority of Russia’s citizens today support demands for the authority’s openness, providing opportunities for citizens to influence authority through legitimate democratic procedures. A growing number of “self-sufficient” Russians are striving to orientate themselves in their daily lives, not on assistance from the authorities, but on their own forces. However, the readiness of such “self-sufficient” citizens for collective action is low, they consider themselves as supporters of change, but not as the actors of social change.

Be the first to review “Petukhov V.V., Petukhov R.V. Request for Change: Factors and Causes of its Actualization, Key Components, and Potential Carriers. – Polis. Political Studies. 2019. No 5. P. 119-133 (In Russ.)” Cancel reply