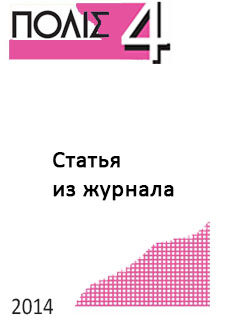 It is generally accepted that socialism and conservatism have nothing in common. In Russia however the large political organization, the Communist Party of the Russian Federation (the CPRF), exists whose ideology includes both left-wing (soviet, communist) and right-wing (traditionalist) values. That’s why we may treat the CPRF as left-wing conservative party. But why is such a combination of left-wing and conservative concepts possible? In search of explanation, the author analyses the mutual relations between conservatism and socialism in 19th and 20th centuries. He stresses that already in 19th century conservatism and socialism possessed some contact points. Both socialists and conservatives denied liberal civilization based on individualism and rationalism. In tsarist Russia Slavophiles and radical populists (narodniki) contrasted the values of Russian peasant community with the individualism of bourgeois Europe. After the 1917 October revolution some intellectual trends emerged which regarded the revolution and communism as a continuation of Russian tradition (“national bolshevism”, Eurasianism, communist “neo-slavophilisme” of 1970s). In the author’s view they were spiritual forerunners of modern Russian left-wing conservatism. After the Russian Communist party’s restoration in 1993 left-wing conservatism became the dominant trend in its leadership. In the midst of 1990s the leader of the CPRF Gennadyi Zyuganov revised ideology of the party combining communism with Russian patriotism, Marxism with the views of Russian conservative philosophers. Zyuganov asserted that Russian tradition had communitarian, collectivist and statist nature, and socialism therefore was its organic product. In his opinion the main task of the CPRF was to carry out the synthesis of “red” ideal of social justice and “white” ideal of powerful national state. Analyzing the worldview of the CPRF the author draws a conclusion that Russian communists’ left-wing conservatism has some common points with authentic conservatism but at the same time it possesses certain reactionary features.

Be the first to review “Rabotyazhev N.V. Between tradition and utopia: left-wing conservatism in Russia. – Polis. Political Studies. 2014. No 4. P. 114-130.” Cancel reply